The ‘Cats are playing football tomorrow. HOLY CRAP! Needless to say, were a little excited over here, and some of our predictors got a little wordy. Also, this year we are adding the player to watch for the game…solely because Trent replaced game highlight with player to watch…were still working the rust off as well! None the less, here they are! The first predictions of 2013! 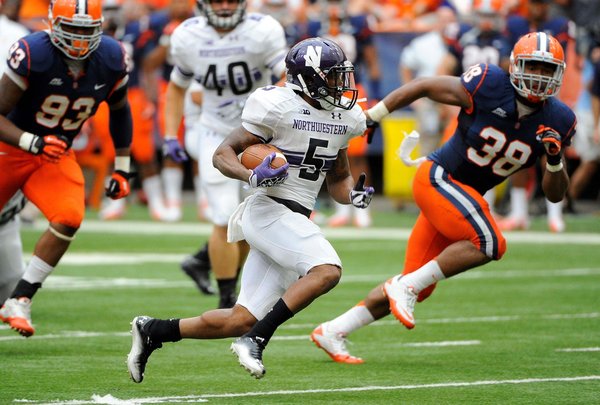 Roger things Venric Mark (Ricky Football) will have a big game against Cal. Can he lead the ‘Cats to a 1-0 start?

Game Prediction: I’m seeing this as a full-blown shoot-out, due to Cal’s Air Raid style of play. I think the ‘Cats come out sluggish because of the cross country trip and late game time – getting down in the game early by a touchdown. We know Cal will throw, but the big question will be can they run? I’m betting on the fact that they can’t, and the ‘Cats will eventually slow the passing game enough to get a few stops. NU will run all over the Bears in the second half, and hold off a late Cal rally for the first W of the season. Although I’m predicting a ‘Cats win, this game scares the crap out of me.

Game Highlight: Roger repeats his performance from Penn State (This is from Andy since Trent didn’t include a game Highlight)

Game Prediction: This game will look similar to last years game against Indiana. The ‘Cats will be stingy in the first half, only surrendering a field goal to a Cal offense lead by true freshman QB Jared Goff who is still trying to contain his butterflies. Kain Colter and Ricky Football find the end zone on back to back drives and the ‘Cats head to the locker room with a dominant 21-3 lead.

Goff returns to the field in the second half more calm and collected and is able to strike a surprised secondary and make the game interesting (and likely induce a round of fireball or two). The defense recovers, however, and grabs a few timely interceptions to keep the game out of reach for the Golden Bears. A late strike from Trevor Siemian to Dan Vitale seals the deal as the ‘Cats roll fairly easily to their first win of the season.

Game Prediction: Before we get into the game summary, let’s rejoice in the season opener! It’s the beginning of Fall. It’s time to go back on my blood pressure meds! Who couldn’t be more excited? Here’s a little fun from our favorite season opener. Hard to believe it was 18 years ago….

On to the summary…. I’m worried about this one. I really am. But, for whatever reason, the games that I’ve worried about in recent memory under Fitz have turned out surprisingly well. Just to remind everyone, Fitz is 7-0 in season openers as NU’s head coach. Having said that, the B1G is historically bad at playing on the West Coast… particularly at night.

I see the ‘Cats jumping out to an early lead here. As the veteran laden team, it wouldn’t surprise me to see Northwestern take a healthy lead early in the game. Cal’s offense will stall early as their true freshman quarterback looks to get into a rhythm. But don’t be fooled, I’m sure this kid is entirely capable if Sonny Dykes is willing to start him as a true freshman. He’ll figure it out and get it going in the 2nd half when all the fun starts.

I see our linebackers and d line getting gassed during the 2nd half, but not because of the run game… because of the repeated dink and dunk nonsense that Sonny Dykes is infamous for. We won’t have any time to get to the quarterback and Cal will start completing 5-10 yard passes over the middle at will.

But alas, Ricky Football will come to the rescue as he always has. Our offense will begin to sputter and things may start to look bleak, but Ricky Football will take a 90 yard punt return TD to the barn and start his dark horse Heisman campaign off on the right foot (or will it be his left foot?).

Game Prediction: Ah, Roger, I never get tired of seeing that video. The day NU football was reborn. I feel like Christmas morning came in August. FAST FORWARD ALREADY.

Anywho – unlike Roger, I’m a less worried about the ‘Cats traveling west to play a late game. I’m a believer in past stats/trends not holding much weight, as the personnel on the field completely changes every four years. I am a little worried about the lack of game tape Cal has. It’s tough to get a gameplan when no one has seen how Sonny Dykes is going to implement his system or how Jared Goff handles the pressure.

As for the game play – I see Northwestern coming out of the gate hot, scoring on their first drive with a Kain Colter rushing TD after a methodical drive. Cal doesn’t get much going early on. After a stalled drive, the ‘Cats get the ball back and Ricky Football breaks open a long run to put the cats into the red zone. He finished the drive a few plays later with a rushing TD. ‘Cats up 14-0 after 1. Jared Goff begins to gain confidence after a couple first downs and brings Cal to within 14-7 at the half.

Cal ties up the game early in the second half, with Goff looking less like a freshman every play. Northwestern’s first few second half drives stall, and Kincade’s falls silent. Jared Goff’s confidence begins to border on hubris as the half unfolds, however, and he throws some ill-advised passes into coverage, resulting in Ibrahim Campbell and Daniel Jones INTs. This ignited the Northwestern offense and Dan Vitale hauls in a short pass from Trevor Siemian and turns it into big yards. After a Colter rushing TD finishes off the drive and a Cal turnover, Trevor find Tony Jones deep for a long TD strike. 28-14. Cal never recovers, and a #Budzien4Groza FG stretches the lead to 17 before Cal tacks on a garbage time TD. Fitz moves to 8-0 in openers.

Player to Watch: Is it cliche to pick Kain Colter? Too bad. I’m picking Kain Colter.

And that’s that… Well see if the Warriors are right tomorrow night! Trent will be at the game so hopefully he can bring us home a W!