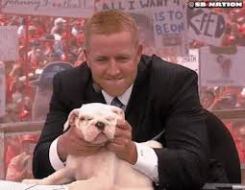 Saturday, October 5, 2013. Mark it on your calendars now. Oh wait that’s right, you’ve already had it marked for 6 months, 3 weeks and 4 days. Ohio State at Northwestern, 7:00 p.m. Central Standard Time on ABC. Homecoming for the ‘Cats. Get ready, folks, it’s going to be awesome. But will it be “GameDay” awesome?

ESPN College GameDay has only visited Northwestern’s Evanston campus one other time – November 11, 1995 (against Iowa). That was the magical year, the year of the Rose Bowl. To land the vaunted college show again 18 years later would be a big time feat, and a sign that Northwestern is back in the national picture. So what are our odds for seeing Kirk Herbstreit, Lee Corso and TBD Northwestern celebrity alumnus broadcasting live from Evanston in three weeks?
One would think they are pretty good. College GameDay traditionally broadcasts from a high profile game each week, ideally between two ranked teams who are nationally relevant. So long as Northwestern takes care of lowly Maine this weekend, they’re assured of a top 25 ranking come October 5th, and a pretty high one to boot (my guesstimate would be about #15). Ohio State has Florida A&M and Wisconsin at home in the next two weeks, and could foreseeably lose one of those games (the Wisconsin one). They’ll either remain at the 3 or 4 spot in the rankings with a W, or fall to around 11 or so with a loss. So ‘Cats-Bucks will almost certainly be a game between two teams ranked in the top 20, both of whom are among the favorites for the Big Ten title.
Fair enough. What other games are scheduled for that weekend? What’s our competition? Current #17 Washington at #5 Stanford. #23 Arizona State v. #22 Notre Dame at Jerryworld in Dallas. Georgia Tech (still undefeated) at #16 Miami.
I think those are the only three games that have a chance to take GameDay away from Evanston. Washington v. Stanford is just as good a game as OSU v. NU, so it could be a coin flip between those two. However, with the knowledge that OSU-NU is a night game on ABC (which will be called by Kirk Herbstreit, who also hosts GameDay), and the fact that Mike & Mike just announced they will be broadcasting from Evanston on Oct. 5th, it feels like the writing is on the wall. The Purple Mafia is out in full force in Bristol, CT, and I’m sure the countless Medill grads roaming the corridors at ESPN are pushing hard to set up GameDay on a date with the B1G ‘Cats. In fact, the official GameDay Wikipedia page currently has OSU-NU slotted in for the 5th of October.
The only bummer would be if ESPN makes the decision to send GameDay to Columbus for Ohio State v. Wisconsin on September 28th, one week prior. If that did happen, it’s very unlikely the ESPN suits would feature Ohio State again the next week. My fingers are crossed that it doesn’t happen, and that GameDay finally returns to Evanston, 18 years later.