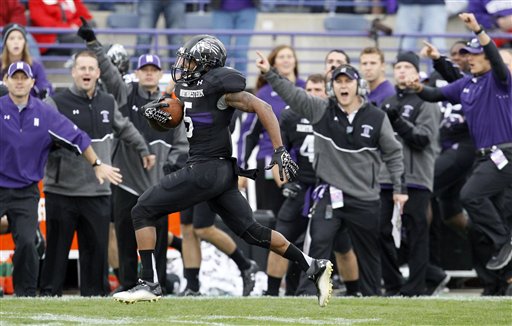 Will the Return of Venric Mark spark the ‘Cats to a win over No. 3/4 OSU? (AP Photo/Charles Rex Arbogast)

Holy cow. It’s only one day away.

Many have argued that this may be the biggest game in Northwestern Football history (See arguments here, here, and here). It certainly is since I was an undergraduate there. Also rumors are floating around that the West Lot opens at 12PM tomorrow, which would amount to an absolutely EPIC 7 hours of tailgating (and likely more of this, this, and this).

Regardless of the outcome tomorrow, we are in for one of the coolest college football atmospheres NU has ever seen. If the ‘Cats come home with the W, this will likely be a day we tell our grandchildren about. bhskasdhsadnjknfdiulkihlihfaifsadlkjyfdbsfhsafdlluw. I’m excited. But I digress, lets get to the picks! This week we have a very special guest picker, ex-NU stud Dan Persa.

Game Summary: I know…. where’s the confidence, Uncle Rog? Well, I don’t have much after seeing the inconsistency in performance over the first 4 weeks of the season against lousy opponents. Not only are we stepping up the level of competition immensely, but this is probably the best team we’ve played in the past several years.

OSU is beatable, don’t get me wrong, but they aren’t beatable if we play 15 yards off their receivers and stubbornly try to run the read option against the quickest linebacking core in the B1G. Furthermore, I’m a bit worried that the coaching staff is going to be enamored with the fact that Ricky Football is back and try to use him too much against a team like this.

I see OSU picking on our secondary (namely Dwight White) all day long. I don’t expect Miller to go to town running the ball, but I do expect him to have a field day through the air.

It’s entirely possible that this game could be close, but that would require our coaching staff to adapt to the flow of the game and they have yet to prove a willingness to do that in the Fitz regime.

Maybe this is the week?

Player (Coach) to Watch: Mick McCall. As much as I love Kain Colter, he better not see much of the field playing QB this weekend. That’s entirely up to McCall. The zone read and read option will get eaten alive by OSU, so let’s avoid it please.

Play of the Game: The atmosphere. No matter what happens, the atmosphere is going to be ridiculous. I just hope that NU can keep it a game so it doesn’t die quickly after kickoff.

Game Summary: Roger hit the nail on the head above. Northwestern hasn’t played a complete half of football since…first half of Syracuse? TEN quarters ago? I’m banking on the fact that NU was keeping the playbook close to the chest and that they’ll unleash the fury come Saturday.

OSU will have no problem scoring on the secondary. Dwight White will be a good player at Northwestern, but that won’t happen until a few years from now. He’ll remember this game as he matures. He’s going to be targeted play after play. Braxton will take the “bend don’t break” mentality all day. Methodical scoring drives set up by 6-8 yard completions.

On the flip side, I see a vulnerable OSU secondary. No NU WR is as good as Jared Abbrederis, but the ‘Cats have a competent corps or receivers capable of some big plays. As Roger said, the read option ain’t gonna work against the Buckeyes. But the ‘Cats are going to try it for a quarter or two. Eventually, Kain is going to have to air it out. Trevor is going to have to air it out. The coaching staff is going to need to be on their toes and adjust the game plan on a dime if they want the offense to keep up with OSU. But I can see either QB lacing up the OSU secondary as well (prolly Trevor moreso). Don’t get me wrong – Northwestern will score, but can they keep up?

How to stop the Buckeyes? The D-Line is going to beed to get pressure on Miller. I’m not so sure they’re capable of that. They need to force Braxton into some bad passes – not necessarily INTs, but bad enough to force the Buckeyes into 3rd and long semi-regularly.

Look, the game is going to be awesome. I see the ‘Cats going up early – maybe 10-0 – before the Buckeyes reach the endzone. It’ll be a shootout from there. In the end, the Buckeyes will be a little too talented for the #B1GCats. But the game will be exciting enough and close enough to earn respect and more national attention

Player to Watch: Tyler Scott. He and the D-Line need to put pressure on Miller for Northwestern to have a chance

Game Summary: Well, here we are, after a whole summer of anticipation. Tomorrow is October 5th. Everything broke perfectly – the ‘Cats are 4-0, OSU is 5-0, and GameDay is in Evanston. But now is something going to break bad? The spread seems 3 points too low (currently OSU -7.5). The ‘Cats have the dreaded weight of expectation this year, and have looked just meh in their first four games. OSU has looked real solid thus far. They look too fast for us. This is the biggest game since I’ve been a ‘Cats fan. These are the games that the ‘Cats usually lose, and lose in heartbreaking fashion.

But – I think this is a kitchen sink game for Fitz. He’ll throw everything at the Bucks, whatever it takes – trick plays, you name it. This is absolutely huge for him. These are the kinds of games he came up big in as a player, and he’s been itching for this opportunity as a coach. A chance to really announce NU on the national level. Primetime ABC. Let’s go ‘Cats!

I think the Buckeyes come out and score first, as Braxton leads a methodical drive down the field and then runs it in himself for the TD. The ‘Cats are down 7-0 before they even touch the ball.

The ‘Cats first drive is going to be fascinating. I think our best chance on offense is to throw, throw and throw some more. So, expect to see a lot of Trevor. To win this one, Mick McCall is going to have to call the best game of his life. We know OSU will score, so the big question is if we can keep up. I think our offense is up to the task. After OSU takes the 7-0 lead, Kain takes the first snap at QB and then rotates to WR on the second play as Siemian enters. Trevor leads the ‘Cats down the field quickly and ties it 7-7.

I think this game will swing back and forth throughout. It’s gonna be a wild one. I think turnovers will be the key to this game – we need at least three turnovers to win this. At the end of the game, Braxton throws a pick at an inopportune time, and the ‘Cats drive into FG range to set up Jeff Budzien for a 44 yarder. He drills it and we win as time expires. Fans rush the field. #Bedlam #GoCats

What did that just mean? It means, you couldn’t set a more perfect table for this game on Saturday. And the ‘Cats aren’t leaving any leftovers.

The ‘Cats come out hot with a quick drive resulting in a score. OSU drives and has a 20+ yard play but gets backed up by a TFL and is forced to punt. The ‘Cats again drive, this time resulting in a Budzien special putting the ‘Cats up 10-0. Despite the early lead and momentum, NU doesn’t score for the remainder of the half and OSU gets on a roll. Braxton finds the endzone on foot and through the air and the Buckeyes head to the locker room up 21-10.

The second stanza is a whole new ballgame, however. Ibrahiem Campbell pulls down an INT on OSU’s opening drive and the ‘Cats roar to the endzone making it a 4 point game. Both teams continue to score, but the ‘Cats are able to occasionally get off the field only surrendering 3 points to OSU and also muster a few more takeaways, giving NU just enough to eek out a 4 point win.

Game summary: Assuming Ryan Field and the surrounding areas don’t burn down in the hours leading up to the game, we are in for an instant classic. OSU gets a quick score off a deep ball early, but once the our defense settles in and calms down we will do a great job of containing their explosive attack.

The return of Venric Mark ignites our spread option attack, and Kain and Venric both take turns breaking off huge runs. Expect the NU coaches to finally open the playbook, don’t be surprised to see Kain at WR or a couple trick plays (wishful thinking). Trevor also takes a large chunk of the snaps to try to exploit the Christian Bryant injury. OSU is ranked 3rd in the country for a reason, but they aren’t superhuman.

Expect a close one that comes down to the wire, with the last few possessions determining the game.

Game Highlight: Off a Nick Van Hoose interception around mid-field, Trevor takes a shot off the quick change and hits Tony Jones over the top for a 58-yd TD BOMB.

Thats 3 for the ‘Cats, 2 for the Buckeyes. Either way, it’s going to be one for the ages. See you there. Also we robbed you of a Thursday Pump Up Jam, so here’s something to tide you guys over: