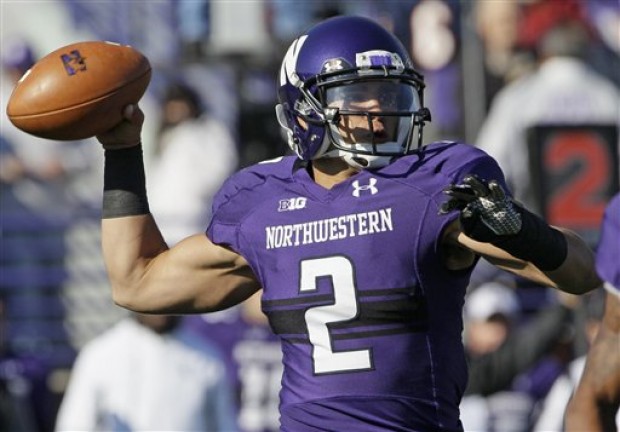 Can Captain Kain help the ‘Cats right the ship? Only time will tell…

Hey! We did it! We’re posting on time! Albeit, missing 2 of our predictors… so this one will be short and sweet. Can the ‘Cats get back on track this week? One of thinks they will, the other… not so much. On to the predictions!

Before I give my prediction, let’s rewind to a comment I made last week:

“As an aside, for those college football fans out there, be sure to tune in to Clemson – Florida State this weekend. Yours truly thinks if FSU pulls off a victory in this one that they’re primed to win their first national championship since 1999. FSU is flying under the radar, but they’re damn good.”

Everyone: You must really know a thing or two about college football.

Me: Yea… I’ve been doing this for years. You might want to pay my prediction some attention this week. You can fatten the ol’ wallet by listen to Uncle Roger every once in awhile.

Game Summary: You’re probably wondering how I could predict an NU victory after the abomination that was the last two weeks. Well, it’s actually fairly simple. We’re playing Iowa. NU has had Iowa’s number for the past 7 years and Fitz hates this team with a passion. Also, the pink locker room. For those that don’t know, the visitors locker room is painted in all sorts of crazy shades of pink. It’s hilarious, but at the same time, it’s kind of motivational. I think most teams that walk into that locker room feel disrespected in some way and that ultimately works to their advantage.

As for the game, I think NU will get exploited by Iowa’s running game. Mark Weisman will have success plowing through the middle throughout much of the day, but I expect NU to leverage their “bend but don’t break” defensive strategy that has won them games over the years.

On the offensive side of the ball, Iowa may struggle to contain Colter (if he plays and stays healthy…. forger this entire prediction if he doesn’t). NIU (granted Jordan Lynch is a beast) had a tremendous amount of success with the dual threat and I expect NU to have a bit of success as well.

I see this one going back and forth throughout with neither team up by more than a touchdown at any time. For some strange reason, I think NU will pull this out but it wouldn’t surprise me if they got flattened based on what they’ve been doing recently.

Here’s to hoping Fitz, McCall and Hankwitz show up this week!

Player(s) to Watch: The D Line. Can it get any worse? They’re giving up 7 yards and a cloud of dust on every power running play. Hell, I could run through some of those arm tackles. Also, the lack of pass rush is frustrating the shit out of me. I really hope that we can get something going on the D Line this week.

Game Highlight: Fake FG for a touchdown. Fitz has been the most conservative coach in the world since he took the helm in 2006. He rarely runs any sort of trick play. Furthermore, this season has been nothing but vanilla when it comes to play calling. Considering we’re free falling (we love you, Tom Petty) and in desperate need of some positive momentum, I actually wouldn’t be surprised to see Fitz pull something out of his ass this week. I could see a fake FG going for a TD this week. I expect it to come on a 4th and 5ish in the first half. Be on the lookout!

We’re back to the gif predictions for me… Here we go!

The Warriors After the Game:

(Coach) to Watch: Mick McCall – Will he stop broadcasting his play calls on the jumbotron this week?

Game Highlight: The play that we score a TD on… Yes there will only be one such play.

I hope the ‘Cats prove me wrong. I really hope they do. This is the first time I have picked against the ‘Cats in the history of WLW picks. We are in Trouble with a capital T, and something needs to change FAST. I’m looking at you Mick.