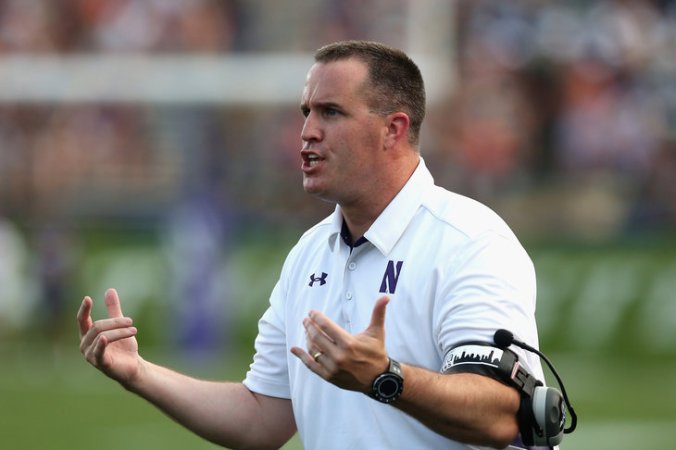 Is NU’s abysmal past haunting the current team, and hindering our future?

I’ve followed Northwestern football fairly religiously for practically my entire life. That’s not an exaggeration. I was at the ’96 Rose Bowl as an 8 year old, the ’97 Citrus Bowl, the 2000 Alamo Bowl… you name it. I understood football well enough to know what was going on right in front of me back then. But, it’s not until recently that I’ve been fully able to extrapolate what defines this program on a deeper level than X’s and O’s.

I wasn’t even a thought during the Dark Ages of Northwestern football, but I’m convinced that’s where our current issues began. Up until the early 1970’s, Northwestern consistently fielded a fairly reputable football team. The 70’s, 80’s and early 90’s are well documented – and not in a good way – in the annals of Northwestern sports history. As a program, we set some historic records of ineptitude that have still not been eclipsed.

Since the ’95 season, we as Northwestern fans have collectively experienced some unforgettable highs and we’ve gradually repressed the Dark Ages. But, NOBODY who is invested in this program has forgotten what that was like. Despite all of the positives throughout the past 19 years that have given us reason to celebrate and forget the past, we just can’t seem to get over the hump and separate ourselves from the past. Nearly every week, this separation anxiety exposes itself in the form of fear.

I wasn’t even alive during the darkest of the Dark Ages, but those memories are still vivid through secondhand account from my father. Say what you want, but I can guarantee you that they are even more vivid for every individual with a significant investment in the team (players, coaches, staff, etc.). Everyone around this program knows the history. The more you’re around the program, the more significant that history becomes. That well-documented past scares the living shit out of everyone invested. It’s a fear of reverting back to decades of misery. A fear of unraveling the progress that has been made.

I saw that fear once again on Saturday and this time I was finally able to identify it. It starts with the staff, works its way to the coaches and is passed on to the players. To a man, the team exudes fear in nearly every facet of the game. No, we aren’t scared of the opponent. Quite the opposite. We are scared of reverting. We are scared of making mistakes. WE ARE SCARED OF THE PAST.

Everyone knows that I’m critical of the coaching staff, but this critique is an irreversible top-down issue. It’s self perpetuating. As soon as the staff becomes fearful, the players can smell it and they too become fearful. I really hope there’s another way to rid ourselves of this issue, but now I’m scared too. I’m scared that a wholesale change is the only way to fix this problem.

Enough with the narrative… here are concrete examples of how the subconscious fear that has become ingrained in this program surfaces on a weekly basis:

“HOT! HOT! HOT! HOT!” I have nightmares of our punt return unit screaming that. Why? Because that’s what each player on the unit is taught to yell to alert the rest of the unit of a live ball situation. So, what’s the problem? The problem is that damn near every punt from our opponents results in a live ball situation. I haven’t done much digging here, but I wouldn’t be surprised if we have fielded (let alone returned) a smaller percentage of punts under Fitz than any other team in the country over the past 9 years. Simply put, we’re scared to make a mistake.

At one point during the Renaissance of Northwestern football it was suggested that we didn’t have the athletes in the secondary to play press coverage. I bought into that… for awhile. I stopped buying into that with Marquice Cole, Brendan Smith, Brad Phillips, Sherrick McManis, Brian Peters, Ibraheim Campbell, Nick Van Hoose and others. These guys are bonafide athletes. Sure, at one point during our DB coach’s insanely long tenure we didn’t have the athletes to play press coverage, but that’s not a viable excuse anymore. We refuse to play press coverage on key plays because we fear we may get beat. Simply put, we’re scared to make a mistake.

This is more an indictment on the current coaching regime than those in the past because Barnett and Walker loved using trickery in key situations. Call it gimmicky… that’s fine. But these plays work. They helped define Boise State and turn them from an irrelevant FCS program to a perennial juggernaut. There’s certainly a lot of risk in running these plays given their complexity and lack of rehearsal in practice but they can be tremendous equalizers. We’ve had trick play after trick play run on us in recent years, but we rarely use them (let alone install them). Simply put, we’re scared to make a mistake.

We become paralyzed in game defining situations. We’re scared of reverting to the past.

One thought on “Fear and Loathing in Evanston”