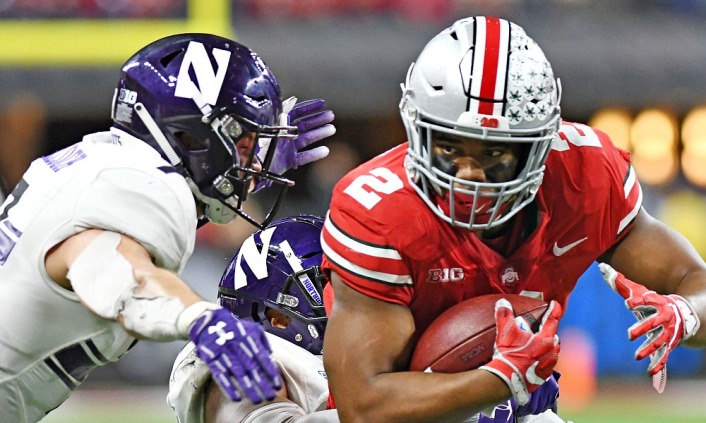 The ‘Cats take on Ohio State in Evanston on a … FRIDAY NIGHT? Too bad the Keg of Evanston is closed, RIP. Luckily, it did not go gentle into that good night.

The Warriors’ contingent may be small for this game, but boy is it mighty. We’re going to need it as the Buckeyes come to town in what should be an overwhelming contingent of red. Let’s check out our predictions for the game.

Game Summary: I got a feeling. Just got a feeling. The ‘Cats are 1-4, morale is quite bad, and the fan base is calling for McCall’s head. We are 25+ point underdogs on Friday at home against a top three Ohio State team, who you could argue has looked the best of any team in the country to-date. It’s the largest spread against us since Notre Dame in ’95. We all know what happened then.

No one thinks we will be remotely competitive in this game. Our defense is great, our offense is atrocious. How will we score any points against OSU? Even if we can hold their offense in check, we still need to outscore them (that’s typically how you win a football game). How in the world will that happen?

It’s a Friday night game coming after a bye – I haven’t done any research but not sure we’ve ever played a game on a Friday before. It’s a weird situation. Ohio State will be looking ahead as they play a top 10 Wisconsin team next week.

Nothing against Ryan Day, who seems so far like he’s a great coach, but he simply isn’t Urban Meyer. He hasn’t been in a close game yet – neither has Justin Fields at OSU. It’s not the easiest thing for a team that’s been on cruise control the whole year to all of a sudden be thrown into a pressure packed situation in what should be a raucous Ryan Field atmosphere. Raucous for which team, I know not (if I had to guess it’ll be 60-70% OSU fans), but raucous nonetheless. If this game is somehow close after three quarters those Buckeyes’ butt cheeks will tighten. You bet that Fitz has had this game circled since last year – not just because it’s Ohio State, but also because they beat us in the B1G title game. He wants revenge (we’ve never beaten OSU with Fitz as head coach).

I subscribe to the George Costanza theory that if nothing is working for you, try doing the opposite. The best thing for those who care about the long term health of the ‘Cats this year is for us to get our doors blown off and then have a poor rest of the year, which should then lead to some coaching changes (cough McCall cough). If you look at it that way, it’s not necessarily a great thing for us to beat OSU, as that will give more reason for Fitz to not make any changes. As ‘Cats fans we can never have nice things, and it feels like we’ll be unsatisfied after this year – one way or another. We’re engrained as a fanbase to expect the ‘Cats to do something stupid and screw it up – the short term gain from beating OSU here would actually likely work against us in the long run.

Continuing down the opposite track – the ‘Cats are just a weird team and tend to do the opposite of what we expect. Every year it seems like we have a very bad loss – whether it’s Illinois State or Akron (I wonder if this is something in our DNA dating back to the loss against Miami of Ohio in ’95). Then we’ll typically beat a ranked team we shouldn’t. We zig when people think we’re going to zag.

Play of the Game: ‘Cats get a defensive TD as Travis Whillock scoops and scores a fumble. Northwestern must score either on defense or special teams to be competitive in this game.

Player to Watch: I’ve got a feeling…that Hunter will start.

Warrior to Watch: Paul is in town for his first tailgate of the season.

Other Game to Watch: During the course of our tailgate on Friday, we’ll have a few appetizer games – Marshall @ FAU on CBSSN (5:30pm kick) and Pitt @ Cuse on ESPN (6:00pm kick). I’m not 100% sure we get CBSSN but we will find out. These will quite literally be the other games we’ll watch as we drink beer amongst a sea of red.

The Cats didn’t win last week, but they didn’t lose.

Unfortunately, the team actually has to play this week. Against Ohio State no less.

The Buckeyes have looked like one of the best teams in the country thus far. For whatever reason, they seem to have cleaned up the mental lapses that were all too common under Urban Meyer. So, I don’t expect them to not show up this week or any week down the stretch.

Game Summary: I think NU’s defense will put up a respectable fight. We’re going to get burned on the perimeter and we’re probably going to have issues setting the edge, but pretty much everyone does against Ohio State.

Sadly, a “respectable fight” for NU’s defense is going to look a lot worse in the box score. Why? Well, Ohio State is probably going to have an average starting field position somewhere around midfield. The Chicago Bears defense would struggle in that situation.

I don’t expect the offense to get 10 first downs in this game. We’ll score a garbage touchdown late to avoid getting shutout.

Play of the Game: Gaziano blindsides Smith and forces a fumble. This provides the Cats with their best field position of the game (Aidan throws a pick 2 plays later).

Player to Watch: Aidan… I assume Hunter won’t play because there’s no point in killing his confidence even more. If it’s Aidan, he should just go out there and sling it.

Warrior to Watch: Paul. Welcome back to Evanston, Paul. Too bad most of the crew is MIA this weekend.

Other Game to Watch: Not sure… is there anything good this weekend?

Game Summary: It will look respectable in the first quarter. Maybe 7-0 OSU. But then things are gonna get out of hand. Fast. The defense will basically spend the entire game on the field, and eventually are going to get beat. Should be safe to turn off at half.

Play of the Game: The lone field goal. Huzzah!

Warrior to Watch: Paul. Hands down. He’s from Ohio. He’s at the game. He’s gonna have a few cold ones. Let the boys play.

Other Game to Watch: Let’s say Michigan vs Penn State, because I love watching Michigan lose.

Play of the Game: The Van starts!

Game Summary: Hopefully some stellar D from the Cats. Hopefully improving to below average for the offense and Mick McCall. Cats keep it close, but can’t pull it off.

Play of the Game: Strip sack in the first half in OSU territory by Paddy Fisher.

Warrior to Watch: Am I allowed to say me? Because I’m gonna say me. You can find me with the White Claw wizard staff.

Other Game to Watch: It’s Friday night, so I guess the Yankees Astros??

It’s draft night and the Warriors are partying like it’s 2005. That was the last year the ‘Cats had a player drafted in the first round. Tonight the odds are that we’ll have two first rounders! If the B1G championship was the Super Bowl for Northwestern, tonight is our Oscars. Happy Draft Day to all who celebrate. #rashawnslater #gregnewsome #gocats #Siemianstrong
Expect Victory. #B1GCats
Almost Gameday. #B1GCats
About time
Loading Comments...
%d bloggers like this: