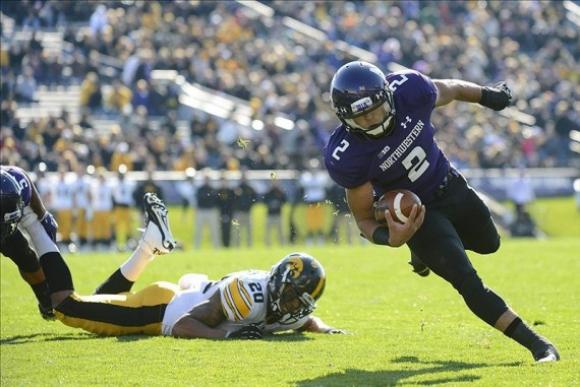 The ‘Cats got trounced by Ohio State last Friday, but it’s Homecoming week so who cares? Iowa comes into town in what should be a low scoring defensive battle. Let’s see who the Warriors have in this one.

Game Summary: The ‘Cats offense has scored 38 points in our four conference games this year, only putting up more than 10 points once. Iowa’s got a good defense and I see this trend continuing.

Our defense is better than it looked against Ohio State last week – the Buckeyes just had way too many athletes and torched our secondary. Justin Fields is legit – OSU looks like the best team in the country right now. We should hold Iowa’s offense in check – this will be a very low scoring game as the 37 over/under indicates. Get ready for some boring ass B1G football.

In Fitz’s press conference Monday, when asked about the offense’s struggles he facetiously mimed looking under and around the podium for some kind of antidote that would fix everything. Well I don’t see any magic beans coming this week, Jack.

Play of the Game: Gaziano sack for a safety

Other Game to Watch: ND – Mich

Game Summary: What can I say. Hard to win football games if you can’t score. Obviously the offense is a dumpster fire, but we haven’t had any defensive scores this season either. Without a pick six Saturday, I don’t see any chance of us winning either. Let me be cleaya, Iowa is not good, but unless Jesus takes the wheel at OC this week, I don’t see how we can possibly beat them. Fire Mick.

Game Score: Iowa 17 – NU 9 — Did we botch a two point conversion or kick 3 FGs? Only time will tell. Under bettors rejoice.

Play of the Game: Some sort of turnover forced by the defense? Please boys. We need ya.

Player to Watch: Riley Lees – hoping he trots out as the starting QB this week. Hell, he played in HS, how much worse could he be?

Warrior to Watch: Trent – He’s firing up the van bright and early. Will he be able to handle our brand new dish?

This week is likely to do the same.
Game Summary: NU will have their fewest first downs of the year in this one. There’s a pro and a con to that.
Let’s start with the obvious con…. minimal first downs means our offense isn’t doing anything. But, our offense is trash and we already knew that. So, that’s a con that’s like a neutral. We’ll take it.
The pro…. it’s going to be a close game. So, we won’t be picking up garbage late game first downs in this one.
Iowa isn’t exactly explosive. This game will resemble the Wisconsin one except I expect us to be even more conservative (if that’s possible) and avoid scoring 14 on ourselves.
Game Score: Iowa 13 – NU 7

Play of the Game: NU picks off a terrible Stanley toss and returns it inside the 10 setting up our only score of the game.

Player to Watch: the D Line. Kent and Brown are out for this one. The D is our only hope.

Warrior to Watch: Trent..he’s in charge.

Other Game to Watch: Auburn @ LSU… LSU is playing with fire each week with a very suspect defense.

Play of the Game: The Iowa kneel-down to end the

Player to Watch: No one.

Other Game to Watch: Wisco to get blown out by OSU in the Horseshoe.

Play of the Game: THE VAN STARTS (again)

Player to Watch: Bowser back?

Warrior to Watch: Gotta be bag

Other Game to Watch: Wisco gets further exposed by the buckeyes.

It’s draft night and the Warriors are partying like it’s 2005. That was the last year the ‘Cats had a player drafted in the first round. Tonight the odds are that we’ll have two first rounders! If the B1G championship was the Super Bowl for Northwestern, tonight is our Oscars. Happy Draft Day to all who celebrate. #rashawnslater #gregnewsome #gocats #Siemianstrong
Expect Victory. #B1GCats
Almost Gameday. #B1GCats
About time
%d bloggers like this: